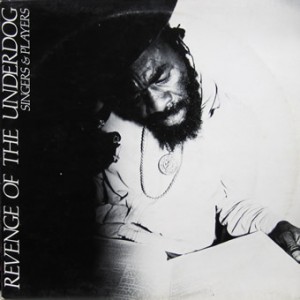 It must have been 1980 or 1981, the birth of ‘On-U Sound’, a magic moment.
From the very beginning I was fascinated by the partly weird, but
super-groovy ‘Reggae’based, sounds created by the Wizard of Dub and
soundeffects, ‘Adrian Sherwood’, one of my alltime heroes !
His beats and basses are incomparable.
Ever since I heard the first notes of ‘On-U Sound’, I bought everything
I could find. What a great days they were.
With ‘Prince Far I’ ( cover ), ‘Jah Woosh’ and Bim Sherman on vocals,
and one of my favourite drummers on track 5, ‘Eskimo Fox’.