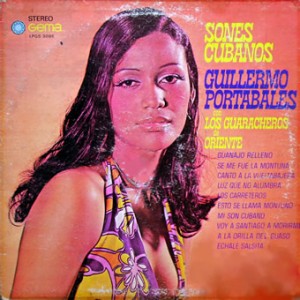 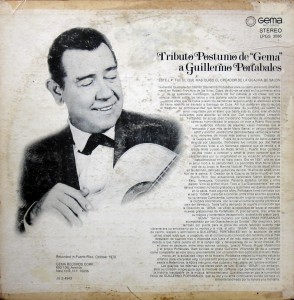 My first encounter with Guillermo Portabales was in 1996, when
this_great_CD_came_out.
He was a unique performer of the ‘Guajira’, a rhythm that is halfway
between ‘Punto’ and ‘Son’. Born in 1911 in Cuba, Cienfuegos,
Guillermo was named the creator of ‘Guajira de Salon’ because he
added melodie and cadence and made it his own.
This album was recorded in 1970 in Puerto Rico with Los Guaracheros
de Oriente, also Cuban. Portabales settled in Puerto Rico and stayed
there until his untimely death on 25th October 1970.
He was hit by a car on leaving a gig at ‘La Palma’ restaurant,
he was 59 years old with a musical career spanning 42 years.

For this once I had to do some colouring on the cover,
it has some ugly stickers and other damage.