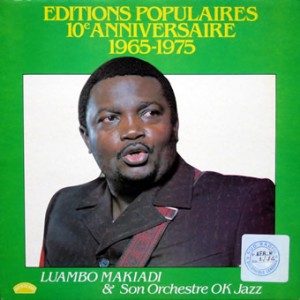 Luambo Makiadi or Franco started out as a guitarplayer back in 1953
at the age of 14. He grew out to be a legend which he remains even
today. Franco died in 1989.
In 1956 he helped found OK Jazz ( OK = Orchestre Kinois,
a Kinois is someone from Kinshasa ). This recording is from the
days ( I quote Rough Guide ) “Franco had an ambivalent relationship
with the state. He was a true patriot, but he also felled
compelled to speak his mind and, while he was an essential
element in Mobutu’s authenticité programme, he was also
reprimanded and jailed more than once and several of his records
were banned.” Track 2 and 3 contain some spoken parts in which
political statements are made. Rare material and very nice.