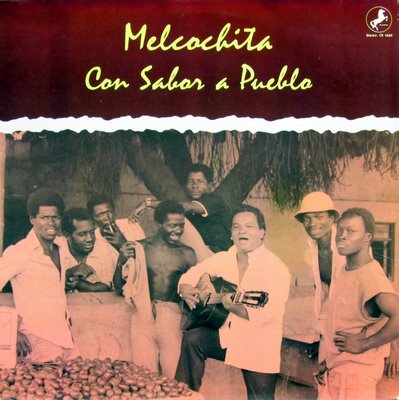 Son is music from Cuba, but Melcochita takes us to a Colombian
village to preach it. With, Alfredito Valdéz jr., Mario
“papaíto” Muñoz, Mario Hernández, José Mangual and others.
Very sweet and sometimes funny Son.

There’s something going on at the photoscene it appears.
If you take a close look, at first I didn’t notice, you don’t
see the guy without shirt’s left hand.
It looks like he is snatching Melcochita’s wallet.
His friend on the left is looking at it too. In the back,
under the tree, that guy’s eyes look guilty as hell, he
tries to keep his pokerface but he knows what’s going on,
same with the white hat, right side, his looks give him
away too. Now check photo number two, taken two seconds later.
He now shows the wallet behind Melcochita’s back to the white
hat. But this one signals with his right hand to keep it down.
The other guys now also see what’s going on.
Back at the hotel Melcochita finds out his wallet’s gone and
says to the photographer, “strange, some one took my wallet,
it couldn’t have been one of those friendly guys down town,
could it ?”