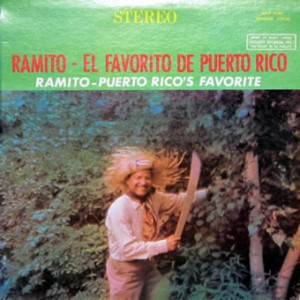 Hello musiclovers around the globe, I just got back from a
two day record-hunt through Belgium and the Netherlands.
I visited Antwerp, Brussels, Nijmegen and Arnhem, and
found quite some material to spoil you with in the
forthcoming weeks.

I start with an album I was very lucky to find.
Let me explain, my first encounter with Ramito was
when I found this_album at La Caja de Pandora.
I was surprised and exited hearing this delightful style
form Puerto Rico. So when I had a conversation with Mrs. Salsa,
in the Amsterdam Bimhuis later, and heard her speak about Ramito
so passionately, I decided to start a search for his music.
She explained to me a ‘Jibaro’ is a wild dog in Cuba, but in
Puerto Rico it is this fine music.
For two days I saw a lot of LP’s and also bought quite some.
When I visited the very last shop, in Arnhem, they had very
little Worldmusic, I couldn’t believe my eyes when this
treasure of Ramito appeared. It was the rewarding final piece
I brought home from a great trip.

About Ramito, I’ll quote the backsleeve; “Ramito is a true
child of Puerto Rico. Born and raised there, he loves his
homeland and shows his devotion in his singing.
Ramito is a troubadour – as such he sings and improvises
about everything that moves him: Love, patriotism, politics
and the trivia of daily live.”
Our friend Yoyo from Listentoyourears will post some Jibaro
in the near future he promised me. He’s got a great collection
of this nice Puerto Rican music.