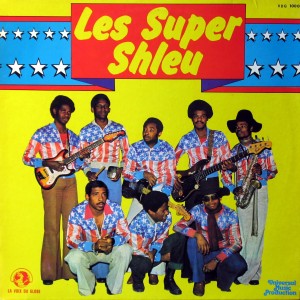 It’s been 4 days since I found the time for some posts.
Been busy doing other things, but today we’re back with
something we didn’t see yet at the GG. Some time ago, one
of our loyal visitors, who lives in Paris asked me if I had
music from Haiti. At the time I was not familiar with it, so
I decided to dive into the matter. Compas is the name of this
style and it’s a happy sound. “The overall sound is sweet and
smooth and the melodies are carried on flowing guitar lines,
regulated by a characteristic rocking beat that pivots between
the hi-hat and a bass drum on the floor.”(Rough Guide)
I found this album on that fair last week. This weekend
I had to visit Paris for other matters and searched a little
for records too. I brought home some old LP’s by groups like
Shleu-Shleu and Coupé Cloué. You can expect some of those later.
For now, listen to this fine LP by Les Super Shleu.