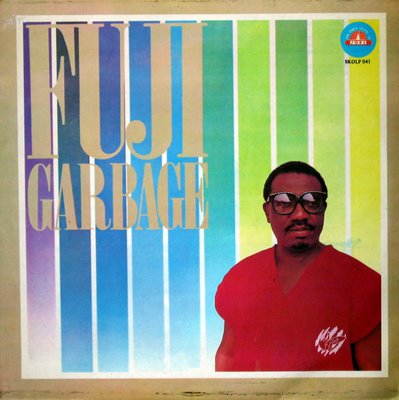 This is the first album with Fuji music on this page.
Fuji is a style from Yoruba-land, sometimes described as
Juju music without guitars. Originally, Fuji ( called after
Mount Fuji in Japan ) is based on muslim ‘were’, the singing
alarm clock songs, performed for early breakfast and prayers
during Ramadan. Sikiru Ayinde, better known by his fans as
Barrister, is the leading Yoruba fuji singer. Fuji is in
fact a quite complex style, drawing on Yoruba percussion
roots, while adding a muslim vocal feel. This LP has great
music but an awful cover to my opinion, ( apart from his
sunglasses ) don’t look too much but just listen
to ‘Barrister’.

By the way, as usual in this type of music, all songs are
melted together as one, I did not devide them.