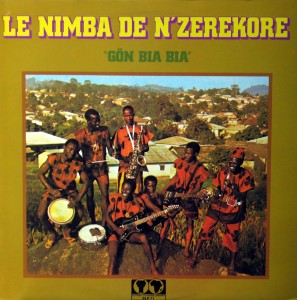 From 1980 is this album by le Nimba de N’zerekore, Syliphone
brought out lots of albums by lots of bands in the 80’s.
I could find no information on this group but I can tell
you this is a fine LP. Singers with sweet voice combined
with guitar driven afrojazz in west african sauce.
Superb rhythms and a great hornsection.