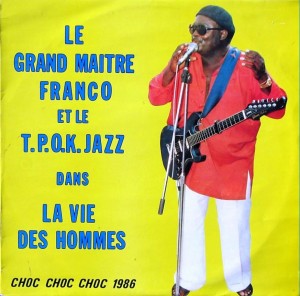 I received some request for more Franco, ‘le Grand Maitre’ made
some 150 albums and I have a few left unposted. He was a real
heavyweight, not just physical (over 300 pounds at his peak),
with about 1000 songs on his name he remains one of Congo’s main
artists. Favourite theme in Franco’s songs was the difference
between men and women, this LP is from the period in which he
peaked on the subject. It’s one of my favs with the great
voice of Malage de Lugendo, superb material.