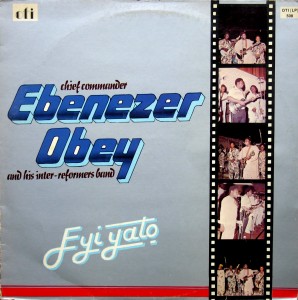 Juju lovers, Pay Attention ! I have heard a couple juju albums
but this is the most Funky Juju I have ever heard.
I now quote the backsleeve notes; “The tracks on this
album are a complete departure from the mainstream of juju format,
although Obey’s style and grace of delivery is very distinct.
Obey has attempted and achieved in this album a very high level
of sophistication through his powerful guitar fireworks, beautiful
lyrics and masterly instrumentation. As Obey himself said on one
of the tracks on the album, “THIS IS SOMETHING DIFFERENT” or to put
it in proper Yoruba language, “EYI YATO”.”