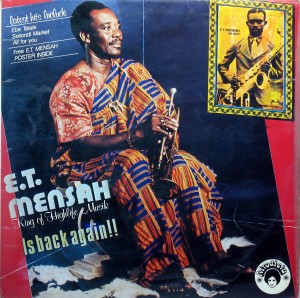 E.T. Mensah was born in 1919 in Accra, Ghana as Emmanuel
Tettey Mensah. He was the main performer of early Ghana
highlife and took over leadership of the already famous
‘Tempos’ after the war. He semi retired through the 60’s
but had a kind of come back in the 70’s. He recorded several
albums for Afrodisia producer Faisal Helwani and this is one
of them. Although recorded in his late days, a sweet album.
Many of us know the two CD’s that appeared, ‘All for
You’ and ‘Day by Day’. Absolute recommendable, both of them.
Originated in Ghana, highlife was taken over by Nigerians
after seeing E.T. Mensah perform on one of his many tours.