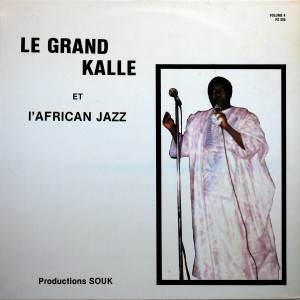 Congolese music changed forever after Joseph ‘le Grand Kalle’ Kabasele
started African Jazz in 1953. Kabasele is seen as the father of
Congolese Rumba. Some huge stars made their fame playing with him, among
who guitar wizard Nicholas ‘Dr. Nico’ Kasanda, Pascal Tabu Rochereau
and Cameroonian Saxplayer Manu Dibango. After Kabasele died in 1983,
the great Franco said; “Joseph Kabasele was the founder of Zairean
music and, although we were in competition, he made many things possible
for me.” This album on Productions Souk, has a poor cover which doesn’t
give us a lot of information. The recordings are from early 60’s probably,
if anyone can tell us more, please do. ( photo from Rough Guide )