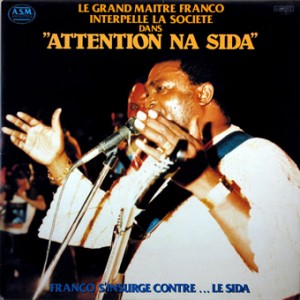 It was when I read the article at Worldservice I realised.
By the way, Welcome back Wrldsrvc.
October 12 it’s been 20 years that the great François Luambo Makiadi
died of AIDS. A huge loss for all lovers of African music.

In 1980, Franco was named a Grand Master of Zairean music by the government,
an honor that linked him with the ruling elite that was responsible for
much of the economic problems beggaring the country. The subject of his
songs shifted dramatically in this period to patriotic songs and praise
songs to wealthy fans. He also began a drastic weight gain, eventually
reaching about 300 pounds (136 kg). However, he retained the ability to
move and excite people with his music. In 1985, Franco released his
biggest hit ever, Mario, an account of a gigolo who lives off of his
older lover. In 1987 rumors began to circulate that Franco was very ill.
The only solo composition he released that year was “Attention Na SIDA”
(“Beware of AIDS”), a warning to avoid catching the disease, leading to
unconfirmed speculation that he had contracted HIV. He began to withdraw
his energies from OK Jazz, causing the band to begin to disintegrate under
internal tensions, and reconverted from Islam to Roman Catholicism. On
12 October 1989 Franco died while in a Belgian clinic. His body was flown
back to Zaire where his coffin was transported on a flag-drapped hearse
with police escort through streets packed with thousands of grieving fans.
The government declared four days of national mourning during which state
radio played nothing but Franco’s songs. On 17 October he was buried.