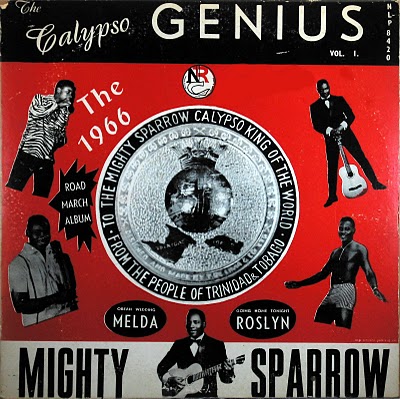 When I was a youngster I used to listen to an LP by Van Dyke Parks,
called ‘Discover America’. It opens with ‘Jack Palance’ by Mighty Sparrow,
it was my first encounter with the man eventhough I did not realize who
I was listening to in those days. Slinger Francisco alias Mighty Sparrow
is a local hero in Trinidad, with his 74 years of age he’s still performing.
I saw him last year in Amsterdam’s ‘Paradiso’. It was great to see the
living legend in person eventhough the old pervert embarrassed the joint,
shaking his lower parts the whole evening through. It is inherent to calypso
music to speak words with double meaning, I guess if you sing that kind of
lyrics your whole life it becomes part of you. It was good fun to witness.
Check out this 1966 LP of ‘Birdie’ the Calypso Genius, it
contains his massive hit, ‘Obeah Wedding’.