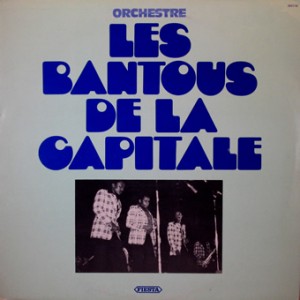 Hearing and seeing this album by Les Bantous de la Capitale, makes me think
of the ‘african’ label. The way the label is built up, orange background, the numbering,
360.118, and how it is positioned. Maybe you can tell me Bo, isn’t this the missing
360.118 in your african list? I may be completely wrong here but it sure looks like it.
They had similar layout style. What was their connection, how did they relate?
Any way, this is an album, released on Fiesta in 1978, but the backsleeve
states it was originally recorded by ‘le Société Française du Son’ in 1968.
Songs are written by ( chronologically ), Bwanga Fély, Michel Boyibanda,
Kabongo Wetu, Pandy Saturnin and two times Nino Malapet. Damn good !