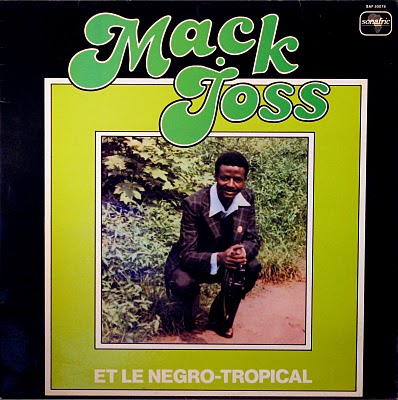 On september 9, I posted ‘l’Afrique Danse 360.111, do you recall ?
With Orchestres Kiam and Lipua-Lipua. The first track, played by
Orchestre Kiam, called ‘Exode’ was from the hand of Mack Joss.
I do not know if he was a member of Orchestre Kiam, do you ?
Now here we have an album by Mack Joss and ‘le Negro Tropical’.
It’s from 1978 on the Sonafric label and in perfect condition. I found it
with a load of other treasures on the Mega Platen en CD Beurs, Europe’s
biggest recordfair, in Utrecht, the Netherlands. The weekend of 20 and 21
of november we’ll have the next edition, I can hardly wait. If you are in the
neighbourhood don’t let it pass by. Listen to Mack Joss & le Negro Tropical.