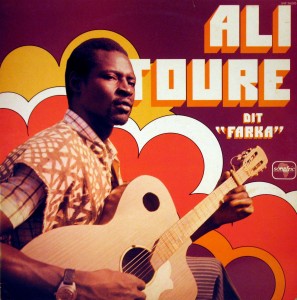 Ali ‘Farka’ Toure was born Ali Ibrahim Touré in Bamako, Mali.
He was the 10th son but the only one that survived. His parents
nick-named him ‘Farka’, which means donkey, because he was so
stubborn and persistant. Famous in all of Africa his music is a blend
of traditional Malinese and blues. Ali reached worldfame with his ’94
album ‘Talking Timbuktu’ which he made with Ry Cooder. The album
was crowned with a Grammy award as was his 2005 album ‘In the heart
of the Moon’ with Toumani Diabate. He died 66 years old of bonecancer.
Listen to this 1979 LP on Sonafric, Ali Toure – dit “Farka”.