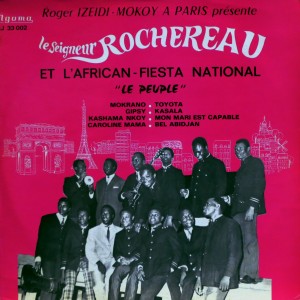 At the back of this album, Rochereau calls tracks 2,4,5,7 not
‘rumba’ but ‘jobs’ or ‘rumba-jobs’. Can anyone tell us what it
stands for ? I never heard the term before. To me, it’s all
rumba, but I’m a layman of course. Hope to learn something
here. But first, absorb the voice of lightness, very nice..