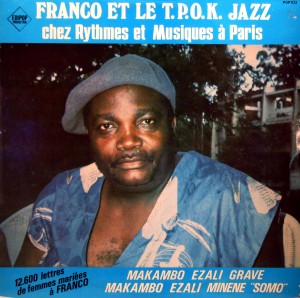 Another wonderful LP by our heroe Franco, one we didn’t see
in our little bloggosphere untill today. From a time he was at
his absolute peak, 1984, a year that brings back loads of
good memories. I am blown away by the first song with Madilu.
Track #4 contains some debate in Lingala, can someone tell
me what it is all about ? thanks & enjoy.

PS, OOOps I made a little mistake, track 3 is called track 5,
can you fix it yourself for this once ? ..sorry..