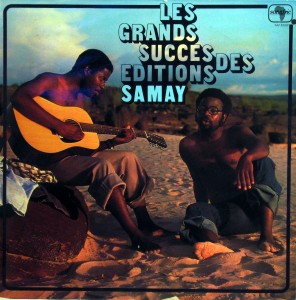 Once more I am presenting you an album by a group I can’t
tell you anything useful about. There is a certain link with
the music of Angola but I do not know which. Names like
Clotaire, Kimbolo, Samba Mascott, Claude Bivoua,
Saboukoulou or Pie Aubus, they don’t ring
a bell. Enjoy listening..