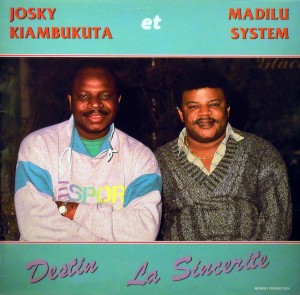 Do you know that saying, ‘never judge a book by looking
at it’s cover’ ? The same wisdom can be used here. About
everything at this sleeve is tasteless. These two guys deserve
a whole lot better to my opinion, and the album as well. Driving
force behind the music machine is the versatile Rigo. The voices
belong to these heroes, Josky Kiambukuta and Madilu System.

P.S.
Only during the recording of the fourth track
I realized it has a religious message. If I had seen
it sooner I would have ignored the album. I am against
all religion. It is strictly out of respect for these
great singers I let it slip through,
enjoy nevertheless !