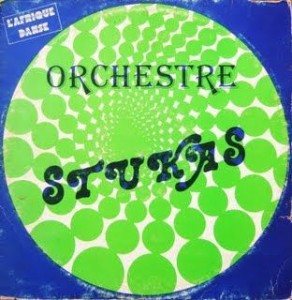 This lp by Orchestre Stukas was waiting to get posted
for quite some time. I was just about to bring it when
‘snap crackle and pops’ posted it. That was almost a
year ago and I think today is the day to re-post so to
speak. I am sorry my copy has a few little pops at the
very beginning of track one. Further than that it is in
fine condition. Lita Bembo and Orchestre Stukas were
extremely popular and the ‘african’ releases
360.130 and 360.131 made
a huge contribution.

“The new music, of which Thu Zahina was a leading
component, was raw and energetic, with emphasis on
spiralling, interactive guitars and rattling snare drums
during the seben, and hardly a horn to be heard. Taking
elements of the animation ( shouting ) from strident forms
of shanty-town music, and also from the wordplay used
at Bakongo funerals, the new bands brought an extra vitality
to the music, adapting traditional dances like the soukous
and inventing new ones such as the ‘cavacha’ to accompany
the extended seben. The groups which capitalised most on
the new wave were Stukas, led by the outrageous showman
Lita Bembo, who played with a frenetic intensity,…”
( World Music, The Rough Guide )
check these Lita Bembo
superb video’s.