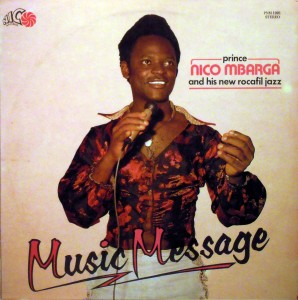 Good evening,
Someone asked for that Nico Mbarga lp which shows in
my sleeve-face pic. It is a ‘best of’ with very familiar tracks
so I thought this one would be a better plan. This is Prince
Nico Mbarga with his New Rocafil Jazz, I do not know from
what year it comes. Anyhow, it was quite some time ago, we
had us an lp by the man so good idea to get him out here again.

This morning I started re-uploading the GG from the very beginning.
I now use another account, I change the name of the folder and use
password protection. To unpack, simply fill in ‘globalgroove’, and it goes.
Damn, I now realize how primitive I made the first posts. My sleeve-pics
are vague, no html yet, it really was necessary to upgrade some of the
older ones but it takes loads of time. I guess I spent about three hours
to re-up and reorganize some 13 lp’s. It’s better not to calculate how
long it will take to restore the whole damn thing. In the near future I
guess I’d better ask a couple of friends to help me. We’ll work
something out. At least I made a beginning and that means
we’re up and running again. I prefer to do it in chronological
order but can make an occasional exception of course.
Well, one way or another, let’s just hope they won’t
kick my files out ever again and
we’ll get there eventually.