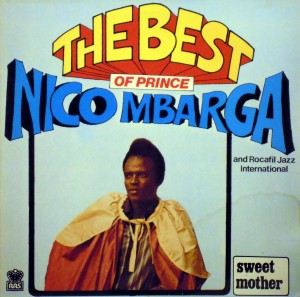 Some requests came in for the music of this fine artist. Prince
Nico Mbarga and his Rocafil Jazz appeared here with over 10
albums. I shall re-up them in the near future, most of the links
are still dead. This is the ‘Best of Nico Mbarga’ which, among
others, contains his biggest worldwide hit, ‘Sweet Mother’. I
never really understood why it was such a huge succes,
it has probably everything to do with the fact Prince
Nico worships his parents and family life. On this
‘best of’ album all titles point in the same direction.
Maybe not my favourite Nico Mbarga tracks but
a fair representative of his oeuvre.