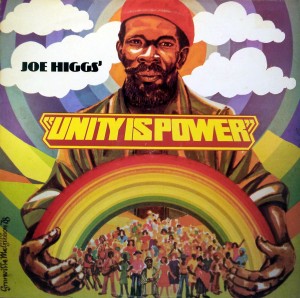 This is the guy that taught Bob Marley and the Wailers to sing
properly. “The Wailers weren’t singers untill I taught them. It took
me years to teach Bob Marley what sound consciousness was
about, it took me years to teach the Wailers. For example, they
will be going to make a record and I would go with them, and
there is somebody making constant mistakes. I would just have
to take this part in order to get the record finished in time.”
Bob Marley began singing in informal sessions at Joe Higgs’
yard on Trench Town’s Third Street in 1960. The Wailers first
got together there in 1961, initially calling themselves ‘The
Teenagers’. After quitting the Wailers at the end of spring 1973,
Bunny Livingstone Wailer became unwilling to leave Jamaica.
Joe Higgs, the goup’s original Trench Town mentor, took his
place for the illfated tour with Sly & the Family Stone.
( Rough Guide ) This is an album from 1978, listen…