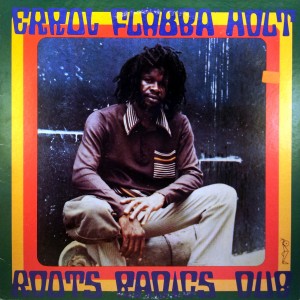 Yesterday evening I went to a concert of Israel Vibration in the
Amsterdam ‘Melkweg’. They appeared with the Roots Radics
and pulled of a wonderful show. Ever since the departure of
Apple, I guess in 1997, the once so famous trio turned to
continue as a duo. I must say Skelly and Wiss made a
huge entree and had the Melkweg at their feet. Remarkable
was the fact they had three microphones while singing with
two. As if they meant to say; ” Whenever you feel like it,
Apple, you’re welcome to join us again..”  Absolutely
marvelous to find Errol ‘Flabba’ Holt and Dwight Pickney
( I thought it was Bingy Bunny ) still performing in the band
they founded in the seventies. After the show I had the
pleasure of meeting with Errol ‘Flabba’ Holt and be able to
tell him what a star and heroe he is.
An evening to remember, listen to an oldie,
Flabba in dub,…yes I…. seen.. ?