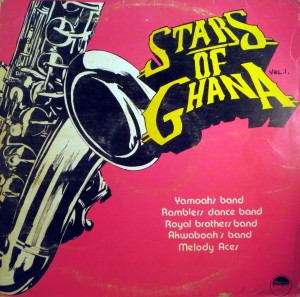 Good morning, on this fine saturday we’ve got you some
highlife from Ghana. The lp we have here ,’Stars of Ghana’,
was released in Nigeria on ‘Blackspot’, appearantly a division
of Decca West Africa. It contains several Ghanaian artists and
I think it’s a swell compilation. The lp is from 1980 and has some
minor noises, not too much. From the groups presented are some
we know from other projects in the past. Openings are taken
care of by the Royal Brothers Band, they kick off with some
of the finest highlifes. Get it, spread it and enjoy..