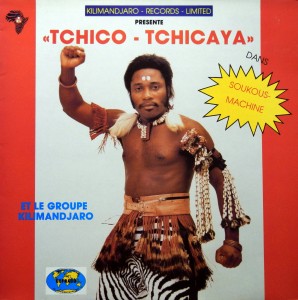 Tchico Tchicaya started in 1970 as a singer in the Brazzaville based
group called Manta Lokoka.
From 1972 to 1974 he was one of the lead singers in Les Bantous
de la Capitale. He occasionally collaborated with influential Zairean
group OK Jazz Band and recorded with le Groupe Kilimandjaro and Tchico
& the Officers. From 1977 to 1979 he stayed in Nigeria where he recorded
4 albums, Afro Festival, Amie Clara, Golden Voice and Méditation.
His nickname was ‘La Voix d’or’ and in that era he sang together with
Lolo Lolita with who he made one of his biggest hits ‘Jeannot’. Tchico
moved tp Paris in 1983. This lp is from 1987 and was made with Jacqueline
Brouta – vocals, Samba Kadhi Bell – backing vocals, Denis la Cloche –
solo guitar, Casanova de Ketchel – rhythm guitar, Remy Salomon – bass,
Denis Hekimian – drums, Lolitta Babind – percussion, Tony – keybords,
Jean-Marie Kabongo – Saxophone and Jean-Claude Léandre on trumpet.
I am affraid you will find dead links on all the older posts for now,
in the future however it’s promised to bring them all back. Listen…