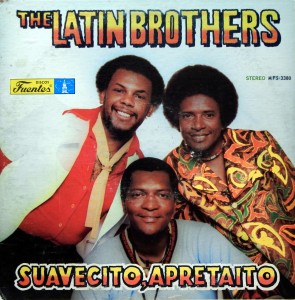 …Fruko was also involved in a group called the Latin Brothers,
who had a string of hits in the mid-seventies.Like most of the
Disco Fuentes projects there was something faintly old-fashioned
about their trombone led sound, but over the decades they have
acted as a school for some of the greatest of Colombia’s salsa
and tropical musicians, both instrumentalists and singers.
Among their number was Joe Arroyo, the biggest Colombian
figure in salsa, and inventor of the purely Colombian phenomenon
called musica tropical, a salsa based music that incorporates
the native rhythms of the coast.
A masterful singer who merges cumbia, salsa, merengue,
compas, soca and other Caribbean musics seamlessly into his
Joe-son mix, Joe Arroyo’s early life followed the the well-trodden
path of many Colombian singers; he started singing professionally
at the age of eight, and by seventeen he joined Fruko y sus Tesos.
After a period with the Latin Brothers, he formed his own group
La Verdad in 1981. His effective mixture of Colombian and general
Caribbean rhythms presented in an exhilarating and colourful stage
show has brought him to the forefront of those Latin musicians
whose appeal is not limited to one country, but stretches
across the continent and beyond..( the Rough Guide )