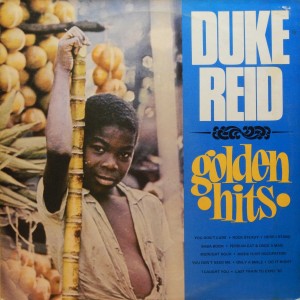 …Duke Reid then became the new champion of Beat Street:
He was crowned ‘King of Sound and Blues’ for the years 1956-58
at the Succes Club in Kingston’s Wildman Street. Born in 1915,
the colourful Reid had served in the police force, where he had
been a champion marksman. After leaving the police he kept up
his connections, ran a thriving liquor business with his wife, and
continued to rear his guns at all times – pianist Theophilius Beck-
ford remembers Duke with a .45 and a .22 tucked into his waitband
and a rifle at his side, and Cocksone joked that he even kept them
on in the bath. The armaments created a forceful impression that
couls often be intimidating, as singer Derrick Morgan cecalled,
talking about his 1959 audition: “I go down by Duke Reid, an’ when
I go down there I see this man in a him liquor store. I say: good
mornin’ mista Duke. Im say: What can I do for you now? I think
he ‘ave two two gun a him side, an’ him finger full a ring. I say:
I hear that you havin’ audition suh, an’ I come fe sing too. Im say:
You can sing? I say: yes, so ‘im say: sing – in front of all who
buying’…”
The combination of powerful sound system and Duke’s aggressive
bearing also attrackted the so-called ‘bad men’ of the day – man
like Dapper Dan, Buggy an’ Horse, Sam Jeggy and Gearge Moore.
They acted as ‘enforcers’ around the dance, and they or their friends
would also sabotage dances held by other sounds, usually by lobbing
stones over the fence or by starting fights…
( the Rough Guide to Reggae )