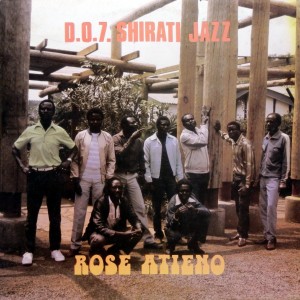 Some visitors asked for more benga. It just so happens I had
one waiting for y’all. Funny thing about benga, I mentioned before,
it seems all titles are person’s names. It’s the only type of music
in which we see this I rekon, That is as far as I know.
the D.O. stands for Daniel Owino Misiani, “the Grandfather of Benga”.
He was the founder of the most famous benga group called Shirati
Jazz. Born in Shirati, just south of the Kenyan border, he has been
playing benga since the mid-1960’s. His style is characterised by
soft, flowing and melodic two-part vocal harmonies, a very active,
pulsating bass line that derives at least in part from traditional nyatiti
and drum rhythms, and stacks of invigorating guitar work, the lead
alternating with the vocal. ( the Rough Guide )
Daniel Owino Misiani died in a road traffic accident in 2006, aged 66.
He was still an active performer at the time of his death and left two
wives and 14 children.

P.S.
I’m affraid I placed one small miscut, the tracks are so close to each
other it was difficult to skip tracks correctly. from track 3 to 4 it is
slightly wrong but if you play it as a whole you wont notice.