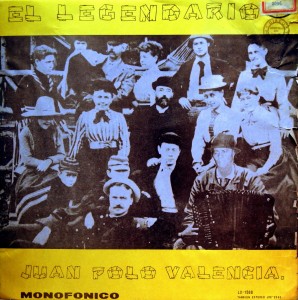 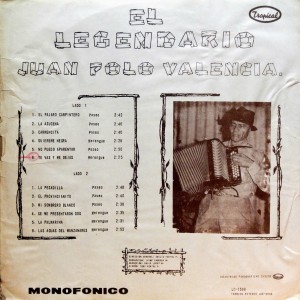 Yesterday my friend Sanjay paid me a visit in my
little shop, we sat on a juice and a southern pacific
cruise..listened to some of the lp’s he brought for me.
Plenty material to look forward to. I promised to start
with this one by the legendary Juan ( Juancho ) Polo
Valencia. We spoke about the idea of ripping 78’s in
the future. Until today I am unable to record any, not
being in the posession of a 78 turntable. It seems we
are missng out on loads of good stuff from Colombia’s
past from before the 33 era. Who know’s what’s yet
to come..

Juan Polo Valencia spent his whole life playing and travelling.
He was born in Concordia, ( Magdalena ) Cerro de San Antonio,
september 18th, 1918 and died july 22nd, 1978. The death of his
wife Alicia Maria Hernandez Paes became the inspiration to the song.
‘Alicia adorada’, together with highlites such as Veni Veni, Lucero
espritual, Si si si and Sio sio I added it to today’s album that also
begins with one of his bigger songs called El pajaro carpintero.
The best interpreters of his work are Alejo Duran, Jorge Oñate, Carlos
Vives and Egidio Cuadrado. Listen to the great Juancho Polo Valencia !