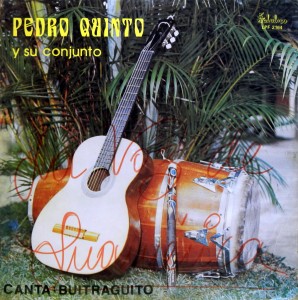 It is a little confusing; Buitraguito sounds as ‘small Buitrago’.
In this case we are speaking of two musicians, the career of
Buitraguito started when Buitrago died. Guillermo Buitrago
of who we had his most famous work here,
already died age 29. He managed to win the hearts of all
Colombians however and hits like ‘Compae Heliodoro’ and ‘Ron
de Vinola’ were originated by him. Buitrago’s ‘Diciembre y Año
Nuevo’ was an album everybody played at the end of the year
and is considered typical new years music. Now Buitraguito
is a man who’s real name is Julio César SanJuán, and because
he was working in the same type of music and had a somehow
similar voice as the old master, he was asked to perform with
Los 50 de Joselito. Buitraguito, who had just left the Vallenato
group of Bovea, made a great impression and they started calling
him ‘Buitraguito’. Warner Bros. wanted to record an album with
all the old Buitrago songs with him but that never happened.
Copying an other’s family name and his music too was subject
of discussions, it was too much and finally he dumped the name.
One way or the other, what we have for you today is an album of
Pedro Quinto on which Buitraguito is the singer. His voice does
sound a lot like the old Buitrago’s and I am thrilled by it..
Musica Parrandera of the highest quality to my opinion.