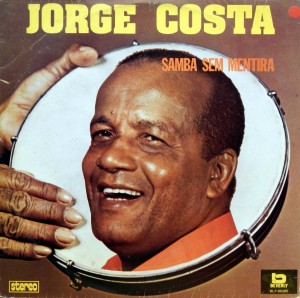 Only shortly I told you what a pity it is not being able to hunt
for samba, there’s so little available in these parts. This here
lp by Jorge Costa however just appeared without a warning.
It proves we can be lucky sometimes and surprises like this
are the things that make life beautiful, don’t you think ? Okay
now let’s see what we’ve got. The best samba, to my opinion,
was made early seventies, this 1975 disc survives the eartest
without problems. I love the songs in which we hear the organ,
it adds a special flavour to the samba, making it extra sweet.
Jorge Costa’s Samba sem Mentira, a real delight.
You know the drill, get it & spread it..