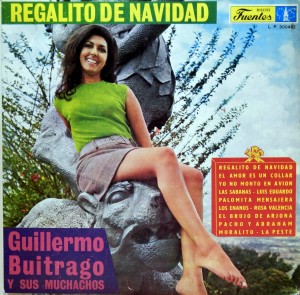 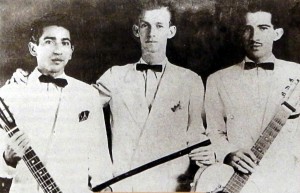 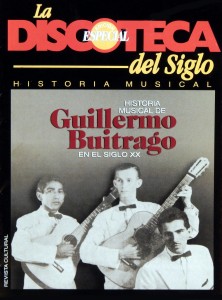 Today’s contribution concerns an album by Guillermo de Jesus Buitrago.
He turned into a historic figure in Colombian ‘parranda’, living from 1920
to 1949 his music is still being played by many. When I first discovered
his work, I guess it must have been in 2003 or 4, it hit me instantly. It
was after I wrote to Discos Fuentes to ask them where to find their cd’s
somewhere here in the Netherlands. They wrote back to me that there
was just one little record shop in Amsterdam that had bought a bunch
in the past. I hurried to the city and found quite some Fuentes stuff there.
It was on the same visit that I found this cd. I didn’t know it yet and on the
way home in my car when I played it first time, I remember it like yesterday.
It struck me like lightning, I wept tears of happiness that day. Since then
I have been searching for his albums and finally found two. Sanjay is the man
that brought them from Cartagena, thank you so much buddy. Discos Fuentes
later sent me the magazine they made about Guillermo Buitrago, you may
find pictures in the file. Big shame Buitrago died at 29 years of age,
he would have made far more fantastic records if he had lived longer.
If you understand Spanish take a look at the video I found about
the last guitar of this historic musician. By the way, if you
think the music sounds a bit dusty, no wonder,
it’s from before 1949..