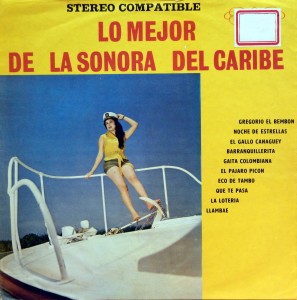 Not long ago we had an lp by Alfredo Gutierrez on which
Lucho Argain ( Lucho Perez ) was performing. Another group
that Lucho used to sing and compose for is this one. La Sonora
del Caribe was founded in 1951 by Chavistad Cesar Pompeyo.
They had a string of records through the sixties and seventies,
the one we have here is probably from 1962 and contains 12
songs of which the brothers Cesar and Alfredo Pompeyo
said; “We never sounded like this before, the songs on
this lp can set any of our fans on fire on any moment
of the day..” Well, let’s see what happens,
get it & spread it as usual..