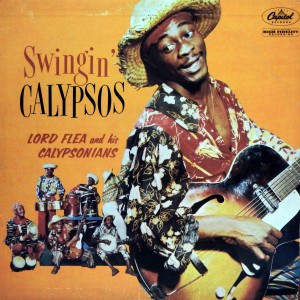 This is the band of Norman Thomas, better known as Lord Flea.
They were very popular playing in Jamaican nightclubs during
the fifties and moved to the United States of America. While
Trinidadian calypso was upcoming Lord Flea was Capitol’s
trump card, he appeared in tv shows and in films. This
lp was made in 1957, only two years later he was victim
of Hodgkin’s disease and died just 25 years old.
I think this is one of the best mento
albums I ever heard, enjoy..

One thought on “Lord Flea and his Calypsonians
Swingin’ Calypsos, Capitol 1957”