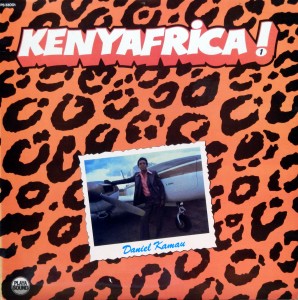 In the series ‘Kenyafrica !’, we had volumes two and five
so far. They were recorded in 1976 and it’s been over 3
years I posted the last one, in september 2011. Finally
I can bring you the number one in the series. It is an lp
by Daniel Kamau, he was born in the ‘Central Province’
of Kenia, the 2nd of february 1949. His parents worked
hard on their little farm to be able to raise the family.
Daniel loved to play the guitar from 9 years old but
wasn’t allowed to touch the guitars of his older brothers
because he was too young..Later he proved them all
wrong being the first to record an album of his own
still being a student. He had several hits during the
seventies, went to England and when he came back
recorded this here album. It is a sheer beauty and
I’m very glad to bring it, enjoy the benga
and pass it on to your friends..