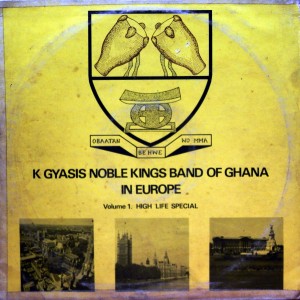 Today’s lp comes with a request. I have asked before if there
would be anyone to help us out here. This album by One of
the most respected highlife artists is so crackly, it is a shame.
Can someone run it through a good filter to take away the
noise and then throw it back at us? the album really deserves
it. K. Gyasi’s Noble Kings Band of Ghana is one we do not
encounter on a daily basis. This lp is made with my favourite
Ghanaian guitarplayer, Eric Agyemang and vocalist Paa Thomas
Frempong. It is from 1976, launched just after their European
tour and recorded at the Island Recording Studios, London.
The tour was supposed to last for six weeks but went on for
five months, july to november 1975. They visited all the major
cities in England, Belgium and Germany, no Netherlands
unfortunately, however, in those years I wasn’t aware of
the greatness of this type of music yet. I must say,
the album sounds quite dusty during the first two
or three songs but gets better further on,
b-side same story, I hope you can help.
get it, spread it and more important,
listen and dance away..