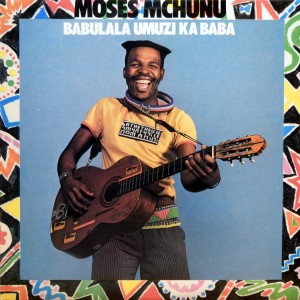 “During the mid-70s and early 80s, Mchunu was one of the
leading vocalists in the raucous Zulu ‘jive’ style, which
gave way to mbaqanga. Mchunu’s band typified its appeal,
featuring driving rhythms and instruments such as guitar,
violin and concertinas, together with powerful blues-based
vocals. He has released a number of albums that have sold
strongly throughout South Africa, but none have managed to
sustain an international reputation.”
Taken from All Music at the world wide web.
Until now I haven’t been posting a lot of mbaqanga simply
because I don’t own and know that much. I knew Moses
Mchunu from that great collector that was released in
1985, the Indestructible Beat of Soweto, so when I
stumbled upon this lp, I knew what to do.
The jive is so stirring, it’s impossible
to ignore, dance music of the
first kind, enjoy..