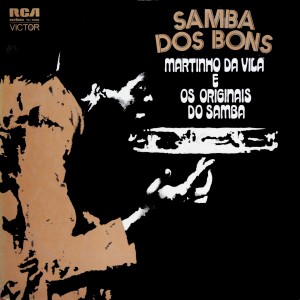 This morning I woke up full of inspiration, I started my computer,
made coffee and chose an album to post. I sat down and the words
just came naturally. My communication skills are often coming short but
today I was somehow satified over the words I picked. Now I am quite
experienced doing this little job, I do it so often, the automatic pilote
takes over when my mind drifts off somehow. I was ready to post,
the recording was succesful but then I realised I had threw away
my so carefully chosen text, damned, it was gone and I was
unable to reproduce the lines. I tried to rewrite it but the words
had gone forever, stupid me..

Now about the music posted today, the album I want
to share with you today is with some of the greatest samba artists. It
is released in 1974 on RCA Victor, Martinho da Vila and Os Originais
do Samba both have a bunch of records posted here, if you want, you
can find them using our search-bar on the left..enjoy.

P.S. I just noticed this is the 100th Brazillian topic
here at the Global Groove, nice number..