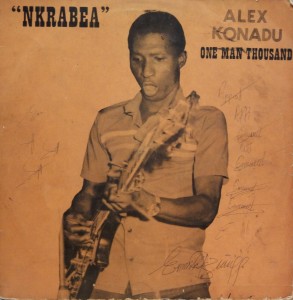 Alex Kwabena Konadu was born in 1950 at Adwumakase
Kese in the Kwabere no.3 district in Ashanti. He developed
a keen interest in music in his infant days when at school.
But as he could not join any band at that tender age, he
learnt to manipulate some of the musical instruments and
never missed watching the concert parties and dance bands
which visited his town to perform at the time. He completed
his elementary education in 1967. He did not persuit further,
but instead took to music as his profession. The first band
which he joined was the Akwaboah’s Band. He remained
with it for three years and then left to join the Happy Brothers
Band as the lead vocalist. While with this group he felt the
desire to be on his own and therefore left after two years stay.
Kwabena went ‘solo’ for sometime, composing and practising.
One day he invited Mr. A.K. Brobbey, a very popular records
dealer and an active producer to listen to his rehearsals.
Having listened to him, Mr. A.K. Brobbey a philantropist and
one of the producers who has the ability to spot talents and
to polish them up, saw that Konadu has the qualities to be
with the best when given the right directions. He therefore,
helped him to organise his present band and signed him on.
With this set of first class instruments and new group, Konadu
has this to say, “Many thanks to my manager and producer
A.K. Brobbey, we shall work hard to be with the first always.”

Unfortunately some idiot has been practising his autograph
all over the sleeve of this lp. Luckily he didn’t start on the
vinyl. The record plays quite well and the music sounds
absolutely great. One small issue though, Label and sleeve
do not agree about tracks 7 and 8. They switched them
around so I stuck with the label, which is also more
complete. If wrong let me know, thanks folks..