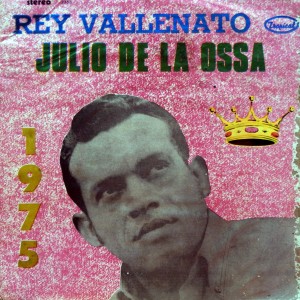 He was crowned King of Vallenato in 1975, ‘el Pequeno Gigante’,
the little giant, born july 20, 1936 in Chochó (Sucre). After participating
8 times, starting from 1968, he won the prestigious festival in 1975.
Once part of the famous group Los Corraleros de Majagual, he made
some 32 lp’s. Part from hits like ‘Adiós Maria’, ‘la Coquetona’ and
‘los Miles Trabajos’ his greatest work was ‘la Colegiala’. The album
we have today is his coronation album. What I do not understand
is the backsleeve says 1974, probably a printing error ’cause the
label is correct. Anyway, enjoy these twelve songs despite
the hum it carries. Get it & spread it..