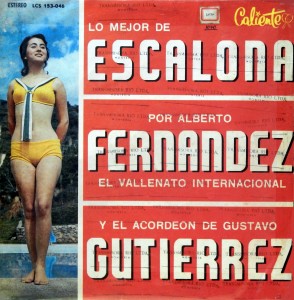 Rafael Calixto Escalona martinez was a Colombian composer
whose music is well known and still being played by many.
His Vallenatos belong to the most prominent. He was also a
close friend of Gabriel Garcia Marquez who once stated his
masterpiece novel ‘100 years of solitude’ was in fact a 350
page vallenato. Escalona himself never played an instrument
nor sang his own compositions. One of the main interpreters
of his music was Julio César Bovea Fandiño, better known as
Bovea y sus Vallenatos. The lp we have today concerns another
singer. Alberto Fernandez with the acordeon of Gustavo
Gutierrez y su Conjunto. 12 great songs for lovers of
the genre. Get it & spread it..