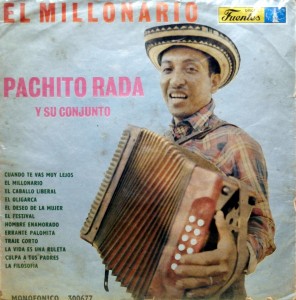 It was puzzeling me for some time now but after some
web search I finally found out what was already expected.
Francisco “Pachito” Rada Ortiz is the son of Francisco “Pacho”
Rada. It looked obvious but until now nobody could confirm.
Pachito’s album we have today is called ‘El Millionario’ while
we just saw the documentary in which became painfully clear
how poor his dad was. Rich or poor, it is all about the music.
Junior’s vocal quality reaches a little further than the old man’s.
Listen to el Millionario and be your own judge..