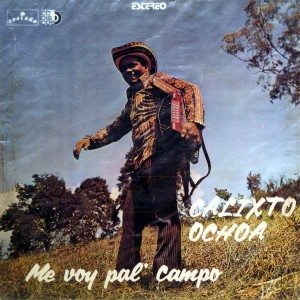 One of our visitors told me. On the 18th of november the world
lost one of the greatest in vallenato. He was one of the members
of Los Corraleros de Majagual and formed his own group later.
Calixto de jesús Ochoa died in a hospital in Sincelejo, Sucre,
Colombia age 81. He won the prestigeous Festival Vallenato
in 1970 and was responsable for quite some hits like ‘los
Sabanales’, ‘Mata’e Caña’, ‘el Mosquito’ and many others.
He was a gifted singer and acordeonist. I dug up this
record which contains eight songs by his hand.
Enjoy and remember Calixto Ochoa.
..para nunca mas olvidar..
read more..

One thought on “Calixto Ochoa – Me voy pal’ Campo
Costeño”