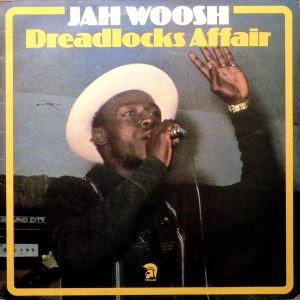 Jah Woosh, real name Neville Beckford, is 23 years old, a
virgo, and one of the most exciting ‘toasters’ to emerge
from Jamaica in 1976. In may, during his visit to England
he had three records in the reggae top ten at the same
time. We feel this must be some kind of a record!
On this album, his first major solo album to be released in
England, he is backed by the Mighty Clouds and on several
of the titles his vocals are assisted by other Jamaican
artists.
On Albert Classau he is joined by Shelton Wallis and on
Falling in Love, Veronica Adams accompanies him. He
is also joined by Levi Williams on Don’t Do That and
Hubert Lee on In Deh.
All titles are written and produced by himself and
recorded at King Tubby’s and Channel One studio.
A fine debut album from Jah Woosh which should
really establish him as one of the front-line
skankers from Jamaica. (liner notes)