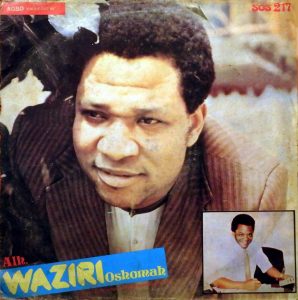 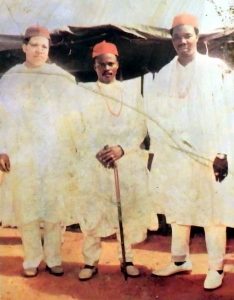 When most people think about the music of Nigeria, the first thing that comes
to mind is probably afrobeat, the darkly funky African jazz stew popularized by
bandleader Fela Kuti, himself a Yoruba from the southwestern region of the country.
Or perhaps they might mention other Yoruba musicians such as King Sunny Ade
and Ebenezer Obey, the twin pillars of the southwestern juju style. Maybe their
thoughts would glide more towards the eastern extreme of the country, where Igbo
highlife stars such as Stephen Osita Osadebe, the Oriental Brothers and Oliver de Coque
have made a mark upon the arena. More imaginative thinkers might look
northwards to cite Hausa and Fulani griots like Dan Maraya Jos, Alhaji Mamman
Shata and Alhaji Musa Dankwairo. It is rare though, that the spotlight is leveled
towards the mid-western region of the region of the country, the territory encom-
passing the modern-day Nigerian states of Edo and Delta. Edo in particular boasts
of a wealth of musical traditions that is both deep and broad, yet shamefully under-
explored; and among this assortment of musical traditions, one of the richest is the
music of the Afemai, or Etsako people. And in the field of Afemai music, the
undefeated champ is Alhaji Waziri Oshomah. (read more at Superfly Records)