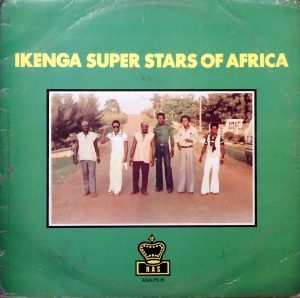 The Ikenga Super Stars of Africa, led by Vincent Okoroego,
a former member of Steven Osita Osadebe’s Nigeria Sound
Makers were a leading Igbo “guitar highlife” group of the
seventies and eighties in Nigeria. The Ikengas called their
style of music “Ikwokilikwo”, a fast-paced form of highlife
popularized by Oliver de Coque and Godwin Kabaka Opara
of the Oriental Brothers, amongst others.The band went on
to record several LP’s, while establishing themselves as one
of the most beloved Nigerian groups of all time, not only in
their homeland but across Africa and in Europe as well.
It has long been rumored .. read more..