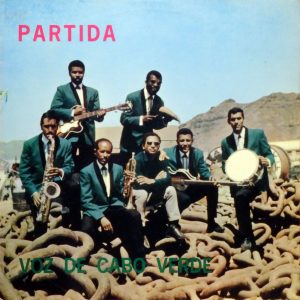 Cape Verdean band founded in Rotterdam, Netherlands in 1966. Their
repertoire included Cape Verdean music such as the coladera and morna,
American and European pop and rock, as well as Colombian cumbia,
Dominican merengue, and Cuban guaracha. The original members were
Luis Morais (Saxophone & Clarinet), Morgadinho (Trumpet, Vocals, Bass),
Frank Cavaquinho (Drums), Jean Da Lomba (Bass Guitar), and Toy Ramos
(Guitar). They were later joined by the singer Diosinha and organist Chico
Serra in 1968. The original band split up in 1970 after a second tour in Angola.
Some of the members immigrated to the United States and France. In Portugal
the group Voz De Cabo Verde carried on in name, but with different members,
recording several albums throughout the 1970s, but
with a completely different sound. (Discogs)